Game shows have proven effective for crowds of a variety of sorts. Whether for a corporation looking for a way to bond employees, a family looking for private parties, or a venue like a mall or casino looking to draw more visitors, there are ways to do just about anything you like.

For each of these, they can be either a high-tech or low-tech affair. Each approach has its benefits and pitfalls. The high-tech approach would include big boards, buzzers, podiums, etc. It obviously has a higher cost and is more flashy. This is the version designed to wow people and to look like it has the expense that is being spent. We generally prefer a low-tech approach to make the event more about the people than the equipment. It also reduces the costs. 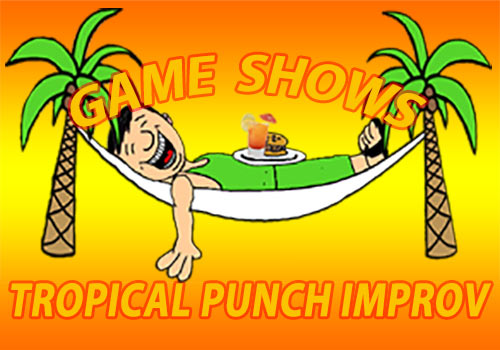 Fun With a Tropical Punch

As mentioned above, we can wow audiences with large installations and equipment or focus on the people and not the equipment. The low-tech approach is designed to be more intimate and to get people laughing about the content. It's very useful for team building and for getting people to know each other.

We can perform just about any game show you can think of with variations on the popular TV game shows such as the Family Feud, the Match Game, Password, Minute To Win It, the Newlywed Game, the Dating Game, The Hollywood Squares and many others.

We also have a variety of other formats, such as Trivia Nights, Audience Olympiads or Getting to Know You. These are nice options because it has people operating as teams and increases the number of participants and audience involvement. After all, people now have a vested interest in the results as they're competing with the other teams.

There are also a couple of murder mystery game show options. One is a Clue Party, where everyone is a character and they mix and mingle and it comes down to Means, Motive and Opportunity. Another is a Cambridge Solution. This uses a smaller number of your group, from 4-10, as the characters in the murder. They don't "act" per se, but simply answer questions in a fun and relaxing environment. For both of these, the audience also not only competes to find the murderer but also votes on who they think is the best actor.